On May 11, 2020, staff to the Local Boundary Commission (LBC) released the “Preliminary Report to the Local Boundary Commission.”  The report is the Department of Commerce, Community, and Economic Development analysis of the City of Soldotna’s petition to annex 2.63 square miles via the legislative review method.   Both the analysis and a recommendation are included in the report.

The public now has until 4:30 p.m. on June 19, 2020 to provide comments on the preliminary report.  A final report is scheduled for release on July 20, 2020.  The report can be found on the Local Boundary Commission webpage.

Due to State staffing changes and the COVID-19 pandemic, the Local Boundary Commission (LBC) has approved a revised schedule for the Soldotna annexation petition.  The new schedule delays the preliminary report and final written decision by two weeks.   The LBC now expects to have the written decision released on September 8, 2020.

Links to the petition documents are located below, and are also available on the Local Boundary Commission website.

The State of Alaska has accepted for filing the City of Soldotna’s petition to annex 2.61 square miles into City limits. The State is now accepting public comments. Instructions on submitting comments are in the public notice. The public notice, petition, and the State’s standards and regulations are available on the links below:

The above materials are also available for review at the following locations:

The City of Soldotna has submitted the following petition to the Local Boundary Commission, seeking to annex 2.61 square miles into the City limits by the Legislative Review Method.  The petition, including all exhibits and appendices, is presented below in individual sections for easier downloading.

The final petition, as authorized by the Soldotna City Council, includes five of the nine study areas that have been evaluated throughout the process.  For detailed maps and plats showing those areas that are included, please see Exhibit A-4, below. 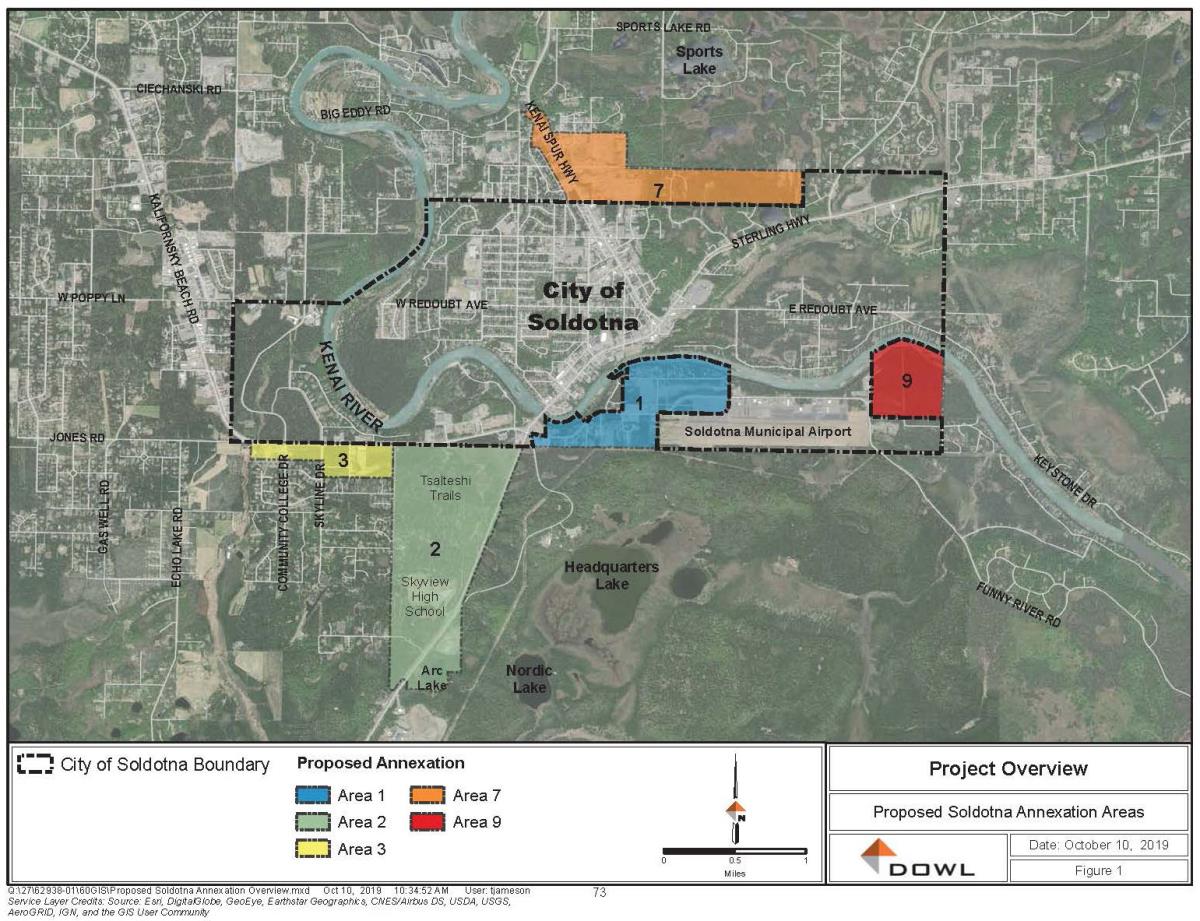 The City of Soldotna has completed a draft annexation petition that is available for public review by clicking on the petition box below:

The City of Soldotna intends to file an annexation petition by legislative review with the Local Boundary Commission. The territory proposed by the City for annexation consists of about 3.8 square miles of land, and includes areas adjacent to the existing City boundaries that is available for public review by clicking on the map box below: 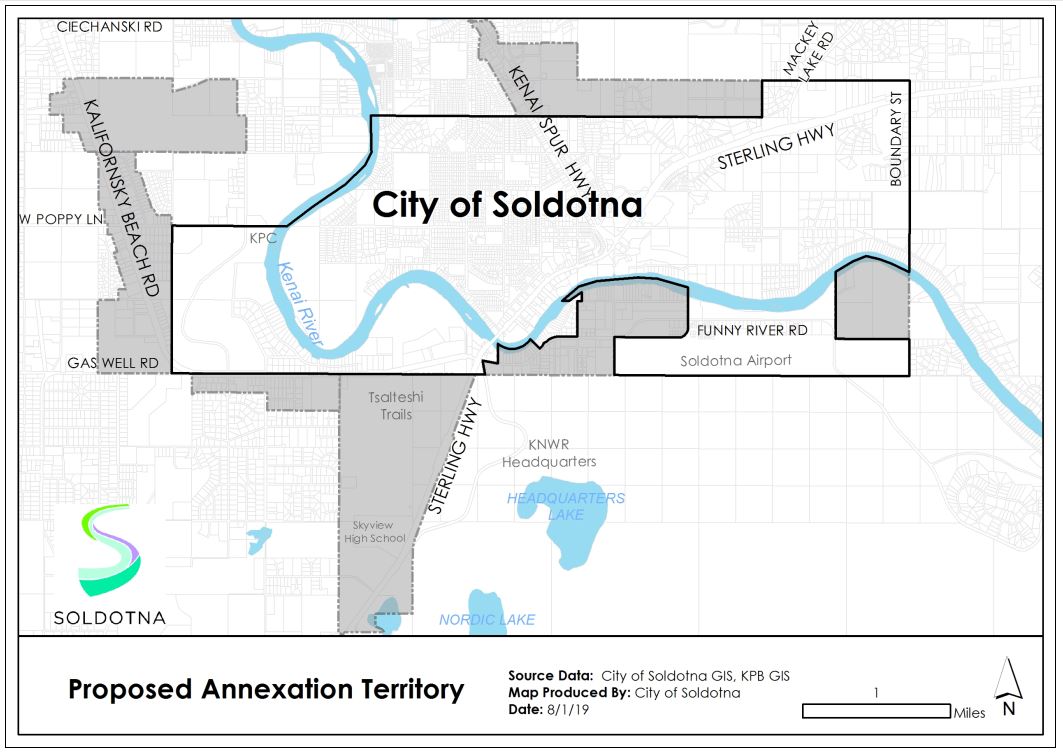 The public will have an opportunity to comment on the draft petition at a pre-submission public hearing on Saturday, September 7, 2019 at 2:00 PM.  The hearing will be held at the Soldotna High School auditorium, located at 425 W. Marydale Avenue, Soldotna, AK.

As noted above, members of the public may comment during the public hearing. The comment time period may be limited to three minutes per individual speaker. Written comments may also be submitted to the city by the end of the hearing on September 7, 2019 by:

Questions can be directed to City Manager, Stephanie Queen or Director of Economic Development + Planning, John Czarnezki at the above contact information, or by phone at 907-262-9107.

A summary of the petition is also available and can be viewed by clicking here.

On June 13, 2018, the Soldotna City Council approved Substitute Resolution 2018-013, directing the Administration to prepare a draft petition for potential annexation areas.   The approved resolution includes 7 of the original 9 study areas, with some being modified from their original boundaries.  Click on the thumbnail below to view the areas included in the approved resolution. 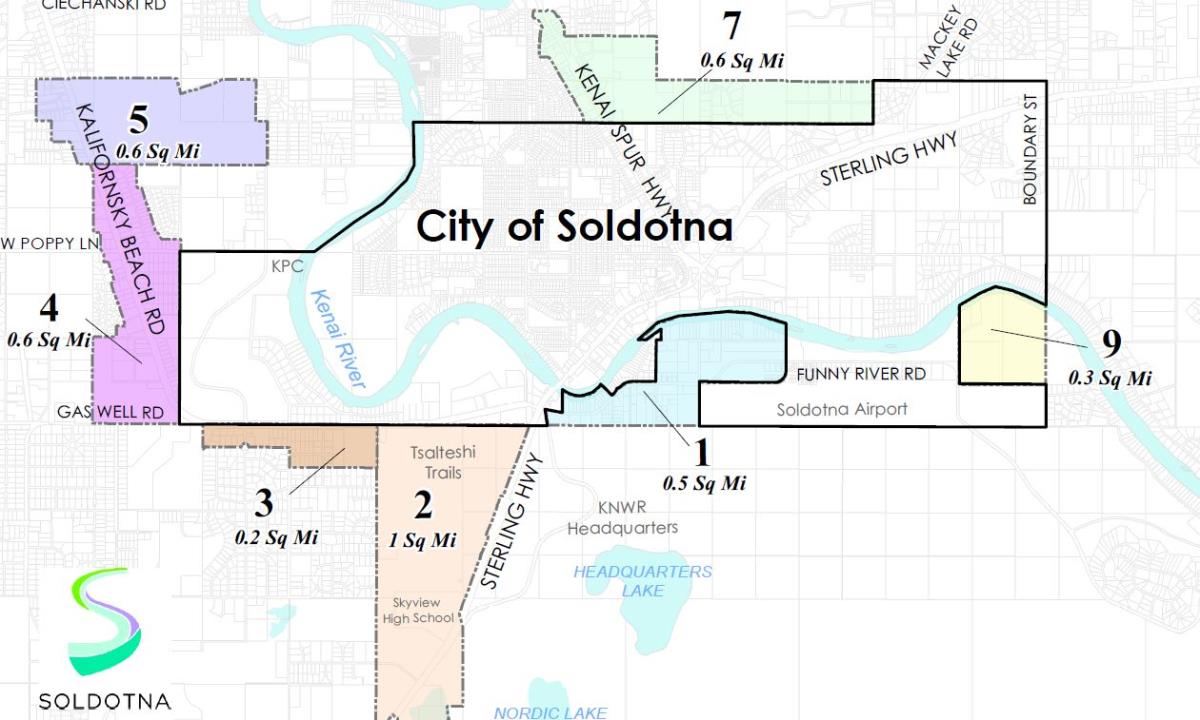 With adoption of the resolution, the Administration will now begin to collect information and to draft a petition consistent with the Local Boundary Commission’s policies and procedures for annexation by legislative review.

A transition plan will also be created to address questions related to the assumption and/or extension of services to the new areas.  The plan will be developed in consultation with the existing service providers, and will address many of the issues identified during the public engagement process.

Once the petition and transition plan have been drafted, they will be presented to the City Council for consideration.

Envision Soldotna 2030, the City's comprehensive plan, was adopted in 2011 after significant public input, as a kind of road map created to guide us toward realizing the community's vision:

Soldotna is a vibrant community in the heart of the Kenai Peninsula, providing a high quality of life through care and attention to both the natural and built environment, and cherishing its past while reaching out to the future.

One of the many recommendations in the plan, is to explore the potential for annexation, as a way of promoting orderly high-quality development, cost-effective extension of public services, opportunities for large-scale developments requiring larger parcels, protection of the City's sales tax base, and protection of the natural environment.  Additionally, the plan recommends coordinating with neighboring communities and landowners to identify common interests and goals.

Though annexation has been discussed and considered many times in the past, the City is following through on the plan's recommendation of exploring annexation, in two phases:

- The first phase identified study areas around the existing City limits, which could be considered for potential incorporation into the City.  A fiscal impact analysis was then conducted, to estimate the cost of providing City services to those areas, and evaluate whether revenue generated in the areas would be sufficient to cover the costs.

- The second phase of exploring the need and potential for annexation, is a robust public engagement process, to allow all area residents the opportunity to share information about why the City is considering annexation and what the potential impacts would be, and to gather comments and feedback from the community about the issue.

Please explore the materials provided on this web page, join the conversation to share your thoughts and hear from others, as we consider this important issue.

John Czarnezki, Director of Economic Development and Planning
jczarnezki@soldotna.org or 714-1246