The final report, summarizing the public engagement process, is now available.  Click the thumbnail image, below, to open a PDF. 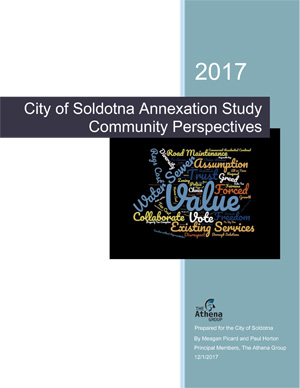 The Athena Group has provided an interim report, to summarize the public engagement process to date.  The report is intended as a preview of study results for community members and City decision-makers, and will be followed by a final report later this year.  To read the report, click the image, below. 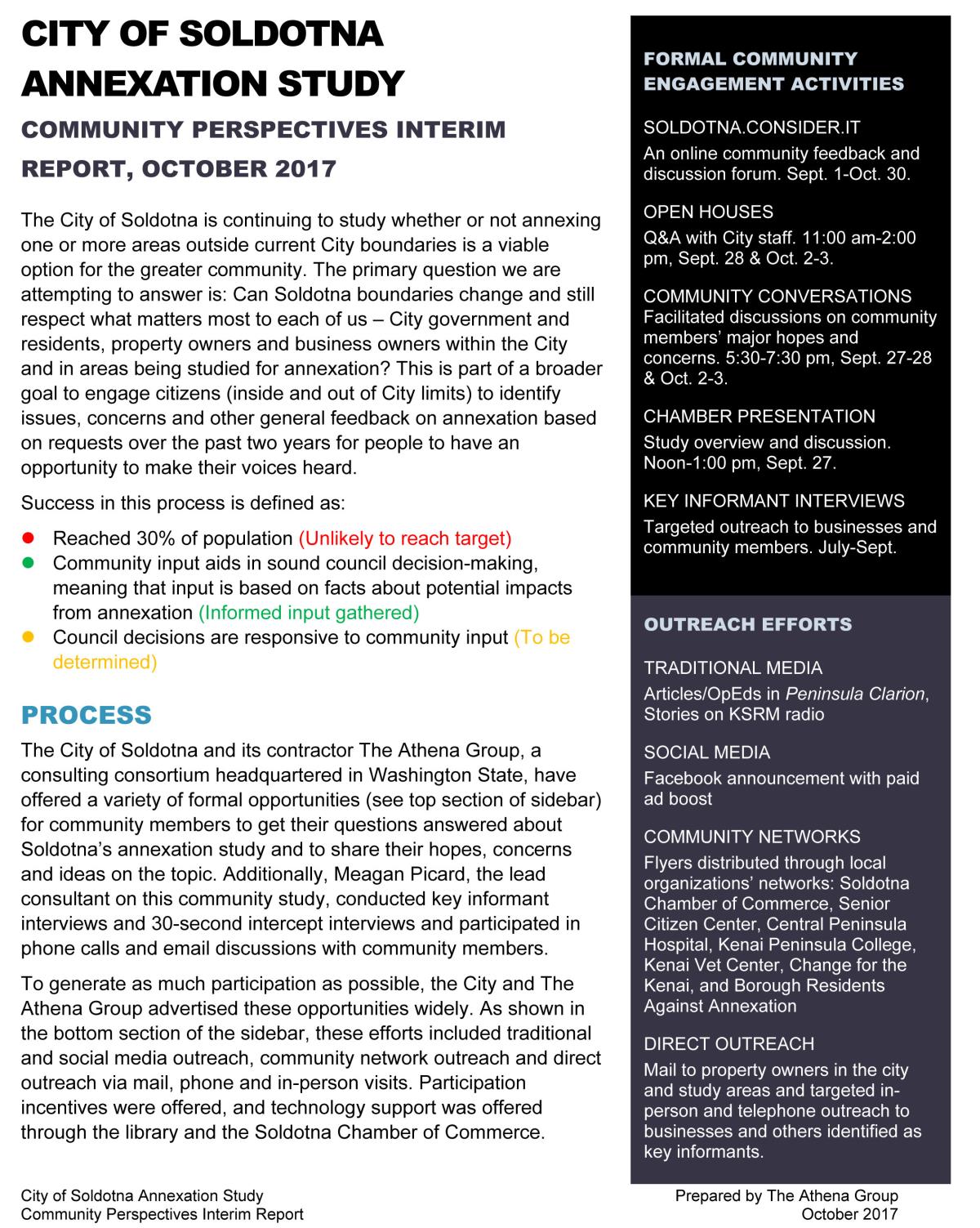 In addition to in-person meetings and open houses, the City has launched an online forum where residents can have an open and honest conversation about how annexation could impact current and potential new residents, businesses, and landowners.

All views in our community matter! Join the conversation at https://soldotna.consider.it to share your thoughts and stay current on what others are saying. 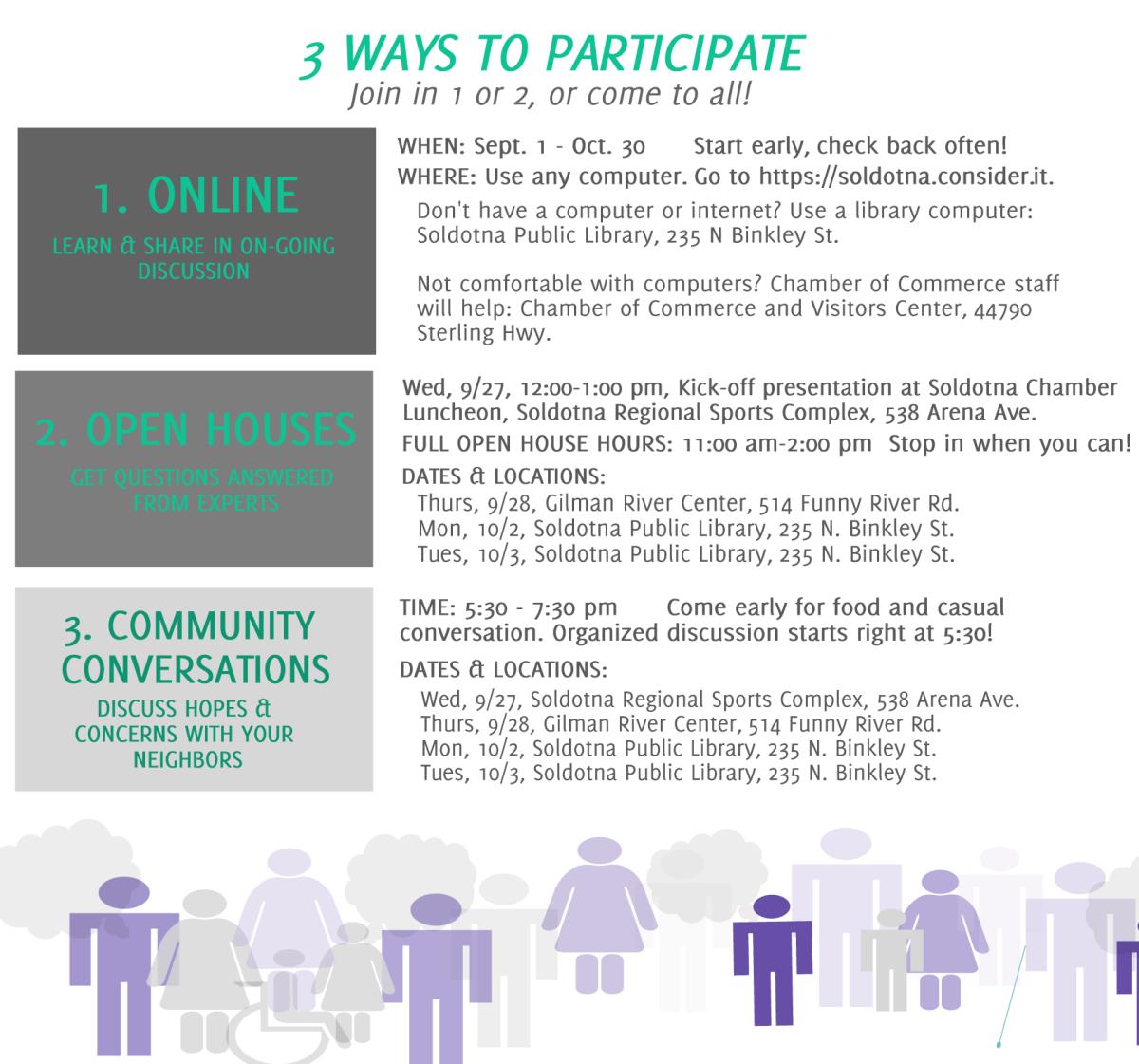 The City is continuing to study whether or not annexing one or more areas outside current city boundaries is a viable option for the greater community.  Your participation is needed!

Building from the fiscal study that was completed last year, the City has hired The Athena Group to design and facilitate a process that will allow everyone to be heard and to hear each other.  As shown in this flyer (Public Engagement Flyer), the process will include:

- An online discussion forum dedicated to this issue for two months.  Everyone is encouraged to visit this site as much as possible to stay current on the progress of the conversation and share thoughts on the increasingly specific questions that will be posed there.

- Four "community conversations" meetings, dedicated to community views on annexation and what matters most to everyone involved.  Current city residents, business and landowners as well as folks in surrounding areas are encouraged to participate in these meetings.

- Three "open houses" plus a kick-off presentation designed to ensure that everyone has reliable information about how annexation would impact the areas being studied as well as current city and borough residents beyond the study areas.

The Athena Group is working hard to ensure these will be productive conversations in an open and trustworthy environment.  We understand:

- This is a heated and emotional issue for some, and trust between people on opposite sides of the issue is low.  The Athena Group honors these feelings and perspectives and will make room for all to be heard - and try to help everyone trust in the process at a minimum, and hopefully, eventually in each other.

- Different groups of people are working with different information.  The Athena Group will be posting a set of informational materials on this website, and will make them available in the community conversations and open houses.  New materials will be posted as the project progresses, so be sure to check back over time.  Please contact Meagan Picard at meaganp@athenaplace.com if you don't yet see the information that you need.

- The City needs to have this conversation and to hear from everyone.  Annexation remains the most direct and practical solution to some key challenges the City is facing, but staff and officials know there is significant concern about its impacts.  They are asking the greater community to have this conversation in more depth than in the past, so they can understand what's behind the opposition, determine if others they haven't heard much from yet (like current city residents) agree, identify ways annexation could work to reduce or eliminate negative impacts from the community's perspective, and provide the City Council with thoughtful and detailed community input to inform their decision on whether or not to proceed with some kind of proposal to the State of Alaska's Local Boundary Commission.

Please get involved!  Make your voice heard - the City and The Athena Group look forward to your involvement on this important community issue!

A public hearing before the City Council will be held on Ordinance 2016-032, which would appropriate funds to initiate a public engagement process to continue to explore the need and feasibility of annexing adjacent areas into the City of Soldotna.  The meeting will be held in the Council Chambers beginning at 6 PM on December 14, 2016.  The public is welcome to attend and provide comment on the Ordinance. (For more information, see the City's Meeting Calendar, which will be updated with information pertaining to the Council meeting as information becomes available.)