The history of the City of Soldotna begins with homesteading that occurred in the late 1940s, although Native Alaskan Athabaskan peoples had lived and used the areas around the Kenai River for many thousands of years prior to the city’s establishment. The construction of the Sterling Highway from Anchorage and the Kenai Spur Highway occurred in the 1950s, resulting in increased settlement in the area. The discovery of oil in nearby Swanson River immediately boosted the population and economy of the area.

The city’s pattern of growth has been confined and shaped by natural and man-made features. The Kenai River, local wetlands, and the natural terrain have concentrated development in the western portion of Soldotna. Today, Soldotna remains Alaska's Kenai River City, pushing forward with bold and innovative efforts to protect and address its natural resources.  In 2012, the city opened Soldotna Creek Park.  Formerly a storage facility and maintenance grounds, the newest addition to Downtown Soldotna serves as as community gathering space, with open greenspace, river boardwalks, picnic pavilions, an amphitheater, and year-round public restrooms. 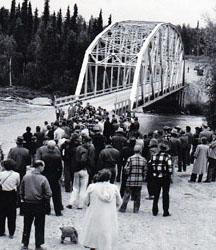